skip to main | skip to sidebar

Currrently (until March 25) Hekman Library has a trial subscription to the World Christian Database (note that access to the database via this link is available from on-campus only).

Here's a little background: Every year the International Bulletin of Missionary Research issues a brief update of significant global and regional statistics presented in the World Christian Encyclopedia (ed. David Barrett et al., 2nd ed., Oxford, 2001). Here's a link to the most recent update, Status of Global Mission, 2013... (this will take you to a page where you can register for free online access to the journal).  The statistical data in the WCE are now regularly updated in the WorldChristianDatabase (now available via a fairly expensive subscription through Brill; we don't subscribe at Hekman Library), but it's good to get the yearly summary in the IBMR.    The update this year also references the very useful Pew Forum report, Global Christianity: A Report on the Size and Distribution of the World's Christian Population, as well as a number of other demographic studies of religion.

When one looks through these statistics the question arises as to how the data was gathered (e.g., how does one get reliable statistics about membership trends in the Hussite Church of Slovakia?) The methodology behind statistics such as this is the subject of a forthcoming book on religious demography: The World's Religion in Figures: An Introduction to International Religious Demography, by Todd M. Johnson and Brian J. Grim (Wiley Blackwell, June 2013). In the meantime, see the article "Estimating the Religious Composition of All Nations: An Empirical Assessmentof theWorld Christian Database," by Becky Hsu et al.,  Journal for the Scientific Study of Religion (2008) 47(4):678–693.
Posted by Hieronymus at 10:20 AM 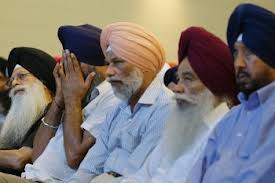 The tragic shooting in a Sikh temple in Wisconsin on Sunday leaves one overwhelmed by the suffering experienced by the Sikh community. Sikhism is one of the major world religions (estimated 30 million adherents) with approximately 250,000 adherents in the United States. Who are the Sikhs, and what is the Sikh religious tradition?

One can easily and profitably turn to the Wikipedia article on Sikhism, and use that as a gateway to other online resources. Here's a list of academically reputable resources, which might be available online if you have access via an academic library: 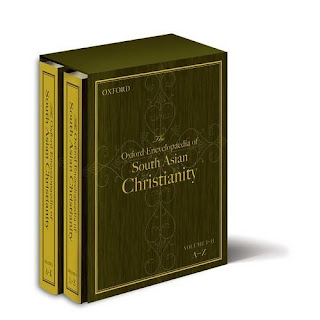 I find the work to be useful and easy to use and access. Both volumes (A-K and L-Z) contain identical front matter (introduction, abbreviations) and back matter (contributors, bibliography, index). The  classified bibliography on Christianity in South Asia,  compiled by Robert Frykenberg, is a helpful addition to the short bibliographies of each individual entry.

I find little  about worship, liturgy, or music in the two volumes.  Its treatment of the South Asian Christian diaspora is also rather meager. (Admittedly, one might expect this in an ambitious work such as this with a lot of topics to cover, but the introduction does promise coverage of diaspora matters, and I expected a bit more.)

This volume does not replace other encyclopedic works which cover South Asian Christianity. For certain topics one can also profitably  consult such works as  A Dictionary of Asian Christianity (Eerdmans, 2001) [Hekman Library ThRef  BR1065 .D52 2001] and the New International Dictionary of Pentecostal and Charismatic Movements (Zondervan, 2002) [Hekman Library ThRef BR1644 .D53 2002]. Both of these have entries which augment or aresuperior to entries in this new Oxford reference work, sometimes with additional bibliography, sometimes with additional content. For example, the article on "Sikhism" in the DAC is far superior to the corresponding entry in the OESAC, although the OESAC article cross-references three significant biographical articles on Sikh converts to Christianity (not found in the DAC),

We've not received notice of online availability through Oxford Reference.

Posted by Hieronymus at 1:08 PM

Hymnary.org is a database index of over 5000 hymnals and includes more than 1.1 million published hymns.  It allows you to search or browse hymns by title, tune, meter, key, scripture reference, and more. This is an invaluable site if you are searching for hymns or songs for worship, or if you are researching a particular hymn, or are looking for a specific musical arrangement.

For example, you can easily find multiple scans of "The Church in the Wildwood" from various hymnals by typing "wildwood" in the "text name" search box:


For some rather quirky offerings of hymnals, search for "poor Robert is crazy", or "naughty little mouse",  or "great ugly spider".

You should also check out the hymnary widget page http://www.hymnary.org/widgets , with its iPad app, hymnal comparison app, and search app  (which allows you to map texts over time by graphing the frequency particular words and phrases appear in hymn full texts across the years. For example, you can see the relative frequency of the words "death", or "heaven", or "hell"  over time.

The site was developed by the Christian Classics Ethereal Library and the Calvin Institute of Christian Worship, with funding from National Endowment for the Humanities grant.

For a thorough, intelligent review of hymnary.org, see David Mayo, "Web Review: Hymnary.org  - A Comprehensive Index of Hymns and Hymnals,"  Theological Librarianship 5, no. 2 (2012):4-5. 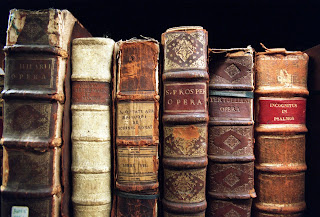 The Post-Reformation Digital Library (PRDL) is a select database of digital books relating to the development of theology and philosophy during the Reformation and Post-Reformation/Early Modern Era (late 15th-18th c.). Late medieval and patristic works printed and referenced in the early modern era are also included. Hosted by the H. Henry Meeter Center for Calvin Studies of Calvin College and Calvin Theological Seminary.
On the second anniversary of its public launch, the Post-Reformation Digital Library (PRDL) has become available in an upgraded form with its own domain (www.prdl.org). This new version of the library is powered by a database format, which allows detailed search queries and integrates findings of source material from a wide variety of digital libraries and digitization projects. After more than a year in development, the new website now covers more than double the number of authors and works as its previous iteration.
Check out our link: www.prdl.org
This new site represents a major upgrade from the previous digital bibliography, and we could not have expanded the coverage to various traditions without your help. Thank you. You can continue to help by circulating this link to your friends, colleagues, and students, as well as by providing us feedback on improving PRDL.
For more details on the launch, you can see the press release announcing the new database-driven site.
http://www.prdl.org/news.php?id=5
Posted by Hieronymus at 9:04 AM

Hekman Library has a print copy of the Routledge Encyclopedia of Philosophy (1998, 10 vols.) , but we're thinking of purchasing the online edition.

To try it out, use this link: http://www.rep.routledge.com from anywhere on Calvin's campus. If you want to try it out from home, send me a note and I'll send you the username and password for our trial ( lschempe@calvin.edu ). We have the trial through February 25, 2011

And, of course, let us know what you think - is this something you would use, or recommend for student use? How does it compare with the free online Stanford Encyclopedia of Philosophy?

Posted by Hieronymus at 4:59 PM

Hekman Library currently has a trial subscription to Electronic Enlightenment, an online archive of correspondence from the early modern period. This can be accessed from Calvin's campus only.

Here's a description:
With 58,555 letters and documents and 7,113 correspondents as of October 2010, EE is the most wide-ranging online collection of edited correspondence of the early modern period, linking people across Europe, the Americas and Asia from the early 17th to the mid-19th century.

Drawn from the best available critical editions, EE is not simply an “electronic bookshelf” of isolated texts but a network of interconnected documents, allowing you to see the complex web of personal relationships in the early modern period and the making of the modern world. The EE team has created an ongoing programme of expanding, linking and original scholarly research to give you thousands of newly composed biographical notes; tens of thousands of corrections of minor errors;scores of thousands of expansions of abbreviations and sigles; hundreds of thousands of internal links and cross-references.
Posted by Hieronymus at 10:39 AM 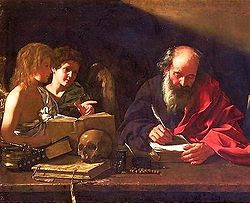